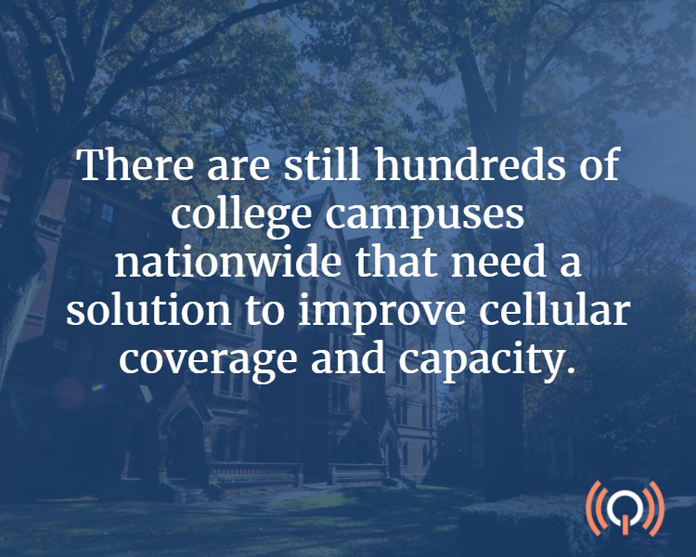 Improving Cellular Service on Campus: What Universities Need to Know

While a campus may be served by “macro-level” cell towers in the area, tower signals can’t always provide consistent service in and around campus buildings, due to two main factors:

Coverage – Older buildings, underground facilities, and newer, environmentally-friendly buildings can obstruct the radio frequency (RF) waves from the cell tower that are needed for cellular service.

Capacity – Students use a lot of data. The need to be always-connected and pervasive use of social media is very demanding on data networks. Students and faculty tend to have more data-intensive needs and often use bandwidth-heavy applications for academic and research purposes.

There are many different technologies that can be used to improve service in and around buildings on college campuses. One of the most common is a distributed antenna system (DAS), which is a standalone network that distributes a signal to a series of small antennas located in areas where more coverage and capacity are needed. DAS can be used in both indoor and outdoor environments, and campus solutions are typically an indoor-outdoor hybrid solution.

Some large universities have already taken steps to improve cellular reception on campus. For example, Duke University upgraded its cellular infrastructure by installing a multi-carrier DAS. The university decided to install a neutral-host solution, which allows multiple wireless carriers to “plug in” to the system. The multi-million-dollar project was funded by Duke’s three preferred wireless carriers (AT&T, Verizon and Sprint), who also provide ongoing monitoring and maintenance for the system.

CONTROL – Who will own the system and manage the process for joining the system? Who will provide ongoing monitoring and maintenance? Universities who want complete control can own and manage the systems themselves, but this will require more in-house resources. In a carrier-owned scenario, the university can ask the carrier (or carriers) to take responsibility for ongoing monitoring and maintenance. There are also several hybrid options for managing a DAS. For example, a university could own its own system but outsource management of the system to a third party.

COMPATIBILITY – What technology will be used in the DAS and will it be compatible with all carrier networks? If universities allow a carrier to install an individual system that will only work with its specific technology (instead of a neutral-host system), it may be more difficult for additional carriers to join the system later. (Some universities have already taken steps to address this issue. For example, UNC no longer allows wireless carriers to deploy carrier-specific infrastructure on campus; carriers must join the existing campus DAS network.) 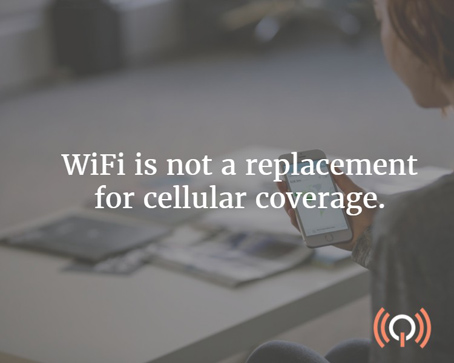 Universities should also consider what other wireless infrastructure systems are currently in place, and how these will integrate with the proposed DAS solution. If there is an existing campus WiFi network, this can serve as a complement to a DAS system, but WiFi is not a replacement for cellular coverage. Are there older systems being used for public safety that can be integrated or retired? When Duke installed its DAS, the university was able to shut down its legacy 800 MHz radio system, which had been used for communications by about 500 facilities staff.

Ultimately, there are many choices universities must make in selecting the right solution to improve mobile connectivity on campus. Understanding the technology and requirements of all the wireless carriers – as well as cost, control and compatibility factors – before embarking on any wireless infrastructure project is paramount.

Does your campus need better cellular coverage? Let us know and a Quantum Wireless representative will contact you to discuss your university’s wireless infrastructure.

Any cookies that may not be particularly necessary for the website to function and is used specifically to collect user personal data via analytics, ads, other embedded contents are termed as non-necessary cookies. It is mandatory to procure user consent prior to running these cookies on your website.